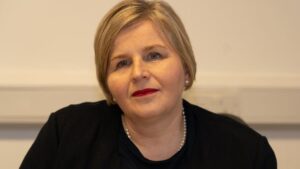 Donna Ockenden has more than 30 years experience of working within a variety of health settings both in the UK and internationally. Donna’s career spans a number of sectors including but not limited to: acute providers, commissioning, hospital, community, and education.

For more than fifteen years she has worked within a number of increasingly senior NHS leadership roles including five years experience as Divisional Director of two large Women and Children’s Divisions on the South Coast and in London.

Whilst working within the NHS and internationally Donna has also successfully integrated a number of key national and London wide leadership roles. These include:

Internationally Donna was the co-author of the first national Maternity standards in the Sultanate of Oman and led the successful introduction of those standards into practice across the Muscat region. In addition she led a multidisciplinary team, as well as parents, government representatives and faith leaders on the introduction of maternity and gynaecology bereavement standards first into Muscat and then subsequently rolled out nationally across the Sultanate of Oman.

Donna is proud to have extensive experience of working positively with multidisciplinary teams including hospital teams, GPs, commissioners and service users to introduce sustainable and lasting change. She has long term experience of service reconfiguration and evidence of working positively with local communities and all levels of staff during complex reconfiguration.

In addition, Donna has completed a wide range of work leading on and reporting to Government, individual Trust and CCG boards on a variety of different independent investigations and external reviews, including elderly care, mental health, maternity, and gynaecology.

Donna has also experienced considerable success in the use of creative and innovative methods of communication to reach out to both service users and fellow professionals alike, including the award winning ‘Edie the E-Midwife’, used across South London Healthcare NHS Trust. All ‘E’ services were extensively road tested with a wide ranging multidisciplinary team and service users before, during and after introduction.